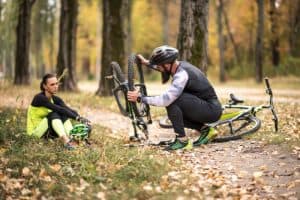 The nice thing about mountain bikes is that it comprises different parts that you can switch out anytime you want. One good example of that is its front wheel. In fact, this is one of the easiest parts to remove.

There also comes a time when you need to take it off. Either because you need to load it on your car. Or maybe the tire was punctured. Whichever the case is, it’s important to know how to take front wheel off mountain bike.

Not only does this give you the convenience you need when transporting your bike. But this also lets you leave your bike behind when bringing your front wheel to your mechanic.

So, how to take front wheel off mountain bike?

There are two different kinds of mountain bike wheel setups. These are:

Quick release wheels have a 5 mm rod that features a lever on one side and a nut on the other. This lets you remove the wheel without using a tool. Pull the lever and twist it counter-clockwise to open up the nut on the other side.

But quick-release axles aren’t anymore popular today because of their safety issues. Compared with thru-axles, quick-release wheels are more likely to loosen on their own and lead to the rider crashing. This is especially true when riding on rocky downhill trails.

That’s where thru-axles come in.

The first one are those that have a lever on one side, while the other doesn’t have any. Instead, it has an Allen thread which can be locked onto the fork and wheel via an Allen tool. But the two types work the same because they are inserted into the wheel’s hub connecting it to the fork.

How to Remove your Front Wheel

The first thing to do is to release the brake’s cable tension so you can remove the front wheel. This frees up your brake pads and distances it from the rim. This then lets your tire slide past it. But this is only applicable if you have rim brakes. You can ignore this if you’ve got hydraulic brakes.

Related: How to Install Brake Cables on a Mountain Bike

The next thing to do is to hang your bike on a mechanic workstation stand. But you can just flip your bike and let its grips and saddle touch the floor if you don’t have any. Make sure you put the bike in a stable position so it won’t wobble, and you won’t have any problem later.

Remove the axle or open the quick release

Flip the lever into open position if you’ve got a quick-release setup. Do this gently and slowly, even if it’s hard. You don’t want to break the levers, right? Then loosen the bolt on the axle’s other side, just enough to free it up. Don’t remove it completely!

But if you’ve got a thru-axle setup, then you can just open the lower and turn it counter-clockwise. This loosens the axle and automatically removes it from the hub.

Remove the wheel from the fork

Slowly take out the wheel from the fork. Make sure you do it slowly and in a parallel motion so it won’t hit the brake calipers and scratch your fork. Don’t dislodge it from your calipers if you’ve got rim brakes.

And there you have it. You’ve just removed your front wheel from your bike!

Related: What is Lockout on Mountain Bike Forks

Knowing how to take front wheel off mountain bike isn’t difficult. In fact, it’s very easy that it’s funny to think you can’t do it even if you’re riding your bike often!

This is a basic skill that every mountain biker should learn, along with aligning the derailleur. This makes you prepared on the trails. It also gives you the convenience you need when transporting your bike on your car.

Just do it carefully and don’t rush things up. It doesn’t matter if you’re slow in doing it. That’s normal especially if it’s still your first time. You’re going to be faster eventually once you learn the right techniques by yourself.

Add in the things you’ve learned from this article. And you’ll surely know the right way on how to take front wheel off mountain bike.

What Size Mountain Bike Wheels Do I Need?

How to True a Bike Wheel: Step-by-Step Process